Seattle and Brooklyn-based Jessica Lurie is one of the elite artists to come out of the Seattle 1990’s explosion of jazz and improvisational music.  An award-winning multi-instrumentalist, composer, and improviser, Lurie performs on saxophones, flute, accordion, electronics and voice.  Influenced by her parents’ love of music – classical, jazz, Broadway and Americana – and Seattle’s diverse and divergent music community, she calls on a wide range of musical influences from around the globe.  Known for “melding lyrical pop, stinging rock, rhythmic Eastern European folk music and improvisation-heavy jazz with a dose of free-wheeling avant-groove-meets-grind” (Dan Oulette), she has performed at festivals, concert halls, universities, clubs, social centers and workshops across the US, Canada and Europe.  She has also received critical acclaim from Downbeat, eMusic, Jazz Times, All About Jazz and many other significant publications.

(On Lurie’s last release, Megaphone Heart) “Multi-instrumentalist Jessica Lurie and her ensemble have put together one hell of a program. Sure enough, it turns out it is chock full of stories. Lurie’s piercing flute, warm saxophone and catchy vocals contrast with guitarist Brandon Seabrook’s snappy banjo playing, the band driven from behind by drummer Allison Miller’s tasteful clobbering.”
4 ½ Stars – John Ephland, Downbeat Magazine

In fact, 2015 was a watershed year for Lurie, with multiple European tours with The Tiptons and as a soloist, ongoing development and groundbreaking performances with Zion80, creative growth with her Ensemble, the founding of Full Fathom Five, and the revitalization of Living Daylights, including multiple sets at High Sierra Music Festival, where she also garnered a “special guest” role, performing with groups ranging from Karl Denson’s Tiny Universe and Galactic to the California Honeydrops and the Tony Monaco-Fareed Haque Trio.

A listing of current projects includes:

Lurie also consistently teaches music, theory, and improvisational technique, and is available for visiting professor and/or workshop activities at universities and other institutions — both as a soloist and in a band variations. 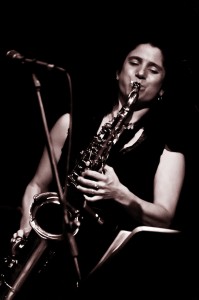